Recently there was posted on FaceBook a short discussion of a proposed Class War in the United States.

About 3,665 adults over 40 years old in Ohio, Illinois, Pennsylvania, Indiana and Georgia received the message reproduced below in their FaceBook news feed.

About 13%, or 487, of those reached engaged with the post and 71%, or 345, of those who responded chose a like or dislike emoji. Presumably those who engaged but did not post an emoji wrote a comment or shared the post. There were 119 comments and 63 shares.

Of the people who posted an emoji, 307, or 89%, posted favorable emoji [like, grin, heart, OMG or tear] while only 38 posted a negative reaction.

It is fair to say that approximately 85 to 90 % of the American public likes the idea of a class war to correct some of the imbalances we see today.

'A class war is a dangerous thing, and, it's just about time we had one!' [Apologies to Mel Brooks]

It is clear as climate change that the economy of the United States is rigged.

BUT, luckily, it can be fixed by adopting specific economic policies.

AND, each suggested policy if adopted by itself without any of the other will help correct the imbalances WITH NO VIOLENCE!

A detailed discussion is available in my Kindle book 'Occupy Wall Street Plan 12: A Proposal for Twelve Specific Governmental Actions to Correct Some Economic Imbalances in the United States of America Kindle Edition'

Search Amazon kindle by the title to buy the complete book for $0.99.

Here's a summary of the Specific Proposals

9. Keep Social Security and Medicare as they are 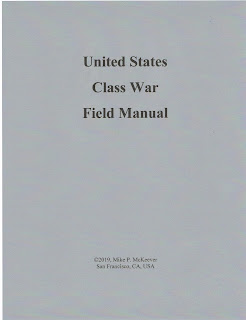 Did you know that almost 80% of Americans who work full time are a missed paycheck, a broken car or a medical problem away from homelessness.

It didn't used to be that way. Starting in the 1970's it became that way because of deliberate economic laws and policies put in place by the Federal, State and Local governments. The Legislators who adopted the policies didn't intend to make peoples' lives worse, but it just sort of happened.

The good news is that the polices can be reversed. People can earn enough for a comfortable life.

To make that happen, we need all of us to sit in front of our Congress people, State Legislators and City Legislators and ask that they change some or all of the policies that created the problem.

You can ignore the ECONOMIC BACKGROUND section under each policy and just ask for change on the numbered policy. Sometimes the Legislator may ask for you reasoning - that's why the BACKGROUND is there.

OR, copy and paste this:

ACTION – Activists meet with Legislators and their staff employees and ask them to ensure Union membership is secure and easy to obtain.

Individual State Right To Work laws should be amended to encourage Union formation.

Union members may wish to accompany the activist in the meeting.

ACTION - Tell your Congress people that you want the National Labor Relations Board [NLRB] to be effective. Give them money. The NLRB enforces labor law. It is understaffed.

ACTION – Laws favoring competition and making monopolies illegal have been on the books for more than 100 years.

Activists will pressure Legislators and the Attorney General for more vigorous enforcement; the laws are enforced poorly today.

ACTION – Activists ask that Congress take back the authority granted by the Constitution over changes in tariffs and trade restrictions. Trade accounts for one-third of the United States economy. It is too important to be left to the President. The Constitution calls for the House to impose tariffs.

ACTION – Activists ask for these:

PUNTITIVE TAX ON WEALTH - Massive accumulations of wealth hurt competition and the economy.

ESTATE TAX should be installed so that we do not create an hereditary noble class.

HIGHER MARGINAL TAX RATES are needed to fund our economy. Historically we have had marginal tax rates of 70 % to 90 % during times of great expansion and prosperity. Our current marginal rate of 37% is simply too low to protect our country.

The goal is to identify and support industries where jobs will be created in the future.

ACTION – Activists ask that the Public Regulation of revenues and profits now used by States to regulate public utilities be extended to more sectors.

Any product or service which is used frequently by most citizens can be considered a Utility and should be regulated as such. Companies such as Internet Service Providers and Cell Phone Providers are not regulated but they act in similar fashion to recognized utilities like water, sewer and electric power.

ACTION – Activists demand that bank officers who commit crimes should be punished with jail time when warranted. Many bankers say that fines are not a deterrent to crimes and that jail time is the only punishment that will prevent some future crimes since fines are considered a cost of doing business.

Keep Social Security and Medicare as they are

ACTION – Activists resist pressure to ‘privatize’ Social Security and Medicare. Such a policy would remove any security from our elderly and infirm; they would be left on the streets to suffer and die

ACTION – Activists apply pressure for universal health care funded by the Federal government. Most other industrialized countries already provide this to their populations. Removing the private profit motive from healthcare is both moral and efficient.

ACTION – Activists pressure Legislators to follow rational Fiscal policy according to Keynesian principles. It is prudent to borrow money for budgets in recession times as it is prudent to have a budget surplus during expansion times. It is not prudent for Congress to fail to expand the Federal Debt ceiling when additional borrowing is needed to pay for budgeted expenditures. The debt must be managed at the time of Budget adoption.

ACTION – Activists pressure for effective campaign n finance laws. Our current system allows political donors to ask for and receive favors from the Congress that makes them richer at the expense of the average person.

SOLUTION - Require all elected and confirmed officials to place all their assets exceeding One Million Dollars into a blind trust so that they cannot make any additions to or subtractions from the trust until 90 days after they are out of office. Details below.

ACTION - Activists pressure Legislators to ensure that all people can vote easily.