Monopolies and oligopolies are bad for the country simply because they exist.

These firms face a downward sloping demand curve for their products as opposed to a horizontal demand curve faced by a firm in competition.

This gives monopolies and oligopolistic firms the ability to change the price of the products. And, because all firms normally want to maximize profits, these firms will charge higher prices and sell a lower quantity than would all the firms in a competitive market.

Even worse is the ability and the practice of these firms to increase their profits at the expense of consumers.

In the graph below which shows the cost and revenue curves and decisions faced by a monopoly, the 'Deadweight Loss' is the pink area to the left of the intersection of the MC, AC and AR curves intersect. The point where those three curves intersect represents the point where there would be a competitive equilibrium or efficient price and production quantity.

Further, the green area represents the area of consumer benefit that is transferred from consumers to the firm as 'Monopoly Profit'. 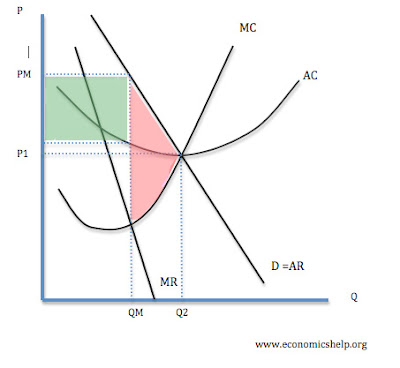 Thus, monopolies and oligopolies which act as monopolies increase their profits at the expense of the economy as a whole ; they are inefficient.

Would that it were just a graph, My Liege, but these actions take large amounts of income from consumers and transfer it to these companies.

Here is a list of industries in which companies earn these abnormal profits [the numbers after the name of the industry refer to the percentage share of total revenues for the industry earned by the four {4} largest firms] in 2002 :

As a comparison, here are the industries and concentration ratios in 1997 :

Our economic recovery will be made more difficult until the concentration of monopoly profits is reduced or eliminated.