This space reports that a test of sentiment among the American population shows an overwhelming support for changes in the current class structure.

Most Americans see the current class structure as unfair and want politicians to change it so that Working class and Middle Class families can have a secure future.

Here is the actual test: Two separate FB ad campaigns were conducted in February by targeting adults over 40 years old who live in areas of mixed political population with a promotion of the idea of a United States Class War.

There was a surprisingly high rate of support for the idea among those who engaged with the ad. The numbers are below, but in summary, it appears that 86.2% of the respondents had a favorable reaction to the idea.

While the first promotion was a generic ad about the idea, the second, and longer promotion supported this book: UNITED STATES CLASS WAR FIELD MANUAL https://www.amazon.com/gp/product/B07NKVSQ6B/ref=dbs_a_def_rwt_bibl_vppi_i2. 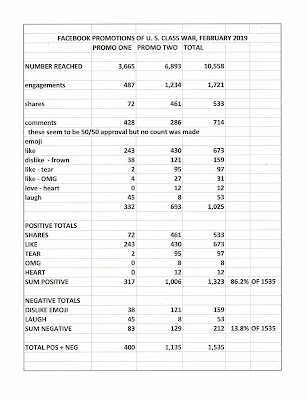 The conclusion is clear - Politicians seeking elective office will increase their chances of election by addressing class, income and wealth imbalances directly.

BUT, any politician promising an improvement MUST deliver or face loss of office.
Posted by Mike P. McKeever Institute of Economic Policy Analysis (MIEPA) at 9:29 AM