The accumulation of great fortunes and large incomes in the United States has a deleterious effect on economic growth and job creation.

Economic growth and job creation comes from people who invest in businesses. It is well known that business investing is risky.

'Of all the new business startups, 1/3 eventually turn a profit, 1/3 break even, and 1/3 never leave a negative earnings scenario. According to a study by the U.S. Small Business Association, only 2/3 of all small business startups survive the first two years and less than half make it to four years', [http://www.gaebler.com]

And, since most jobs are created in small businesses, then it follows that economic growth and job creation requires risky investments.

People who create large fortunes are mostly interested in preserving their capital. They become risk averse as their fortunes become larger. They do not want to invest in risky businesses.

This was first recognized by Keynes in his description of the Marginal Efficiency of Capital. In Keynes' graph, the Marginal Efficiency of Capital is a negatively sloped cuve where higher returns are associated with lower capital amounts and lower returns are associated with higher capital amounts. In the graph the vertical axis represents percentage returns, the horizontal axis represents the dollar amount of capital and the MEC line represents the downward to the right sloping, negatively sloped curve of actual investments made. 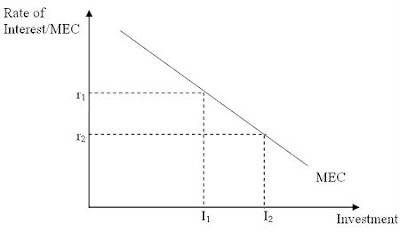 We can see this demonstrated through classifying some investments as low risk and some as high risk in the United States today.

SAFE INVESTMENTS HAVE HIGHER DOLLAR TOTALS - At the other extreme, the value of United States Treasury bills is now about $15 trillion with some one or two trillion added each year. T-Bills are widely regarded as the safest investment in the world and are now paying about 2%.

The total valuation of homes in the United States is about $ 9 trillion after the price meltdown of the last few years. Residential real estate is usually considered a safe investment.

Commercial real estate is also considered a safe investment although somewhat more risky than houses. It is also worth about $ 9 trillion.

Although somewhat more risky than T-Bills, the NYSE is considered a safer investment than new business start ups for a number of reasons. The total valuation of all the companies on the NYSE is about $ 15 trillion.

In conclusion, My Liege, it is clear both theoretically and practically that people with large incomes and fortunes do not wish to invest in busines start-ups. Any activity that increases already large fortunes will take money away from people wishing to start new businesses, thus reducing economic growth and the Economic National Security of the United States.