Over the last forty years we have been observing a stagnation in rise of real wages and benefits in the United States. Since 1970 the median rise has been only 10.7 percent. The most part of the wage rise happened in 1990s and since then we have been experiencing a stagnation in average hourly compensation. This worrisome trend is related with a declining power of unions.

Unions play a significant role in the US economy representing interest of their members by pushing businesses and the government to increase wages and provide other compensations as health insurance or pension for their members. However, since 1970 the percentage of unionized workers has been gradually decreasing. According to studies from 1973 to 2011, the share of the workforce represented by unions declined from 26.7 percent to 13.1 percent. Collected data presents a strong proof of a significant role of unions on the rises of wage. On average, workers covered by a collective bargaining contract earn 13.6 percent more than ones not associated with unions. Also, unionized workers are much more likely to be provided with health insurance (28.2%) and employer-provided pension (53.9%). 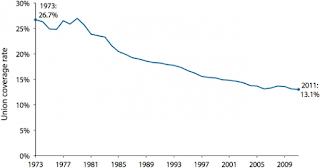 The diminishing power of unions has strongly affected middle- and low-wage workers. Deunionization is one of the most important factors explaining the growth of wage inequality between workers at the top and those in the middle of wage spectrum as well as a divergence between productivity and wages for an average worker. A report by Lawrence Mishel for Economic Policy Institute provides the research proving a correlation in the decline in wages due to erosion of unions based on occupation and education level. The union representation among blue-collar and high school graduates decreased significantly since 1970s. That led to increasing the wage gap by 21.2%. Due to the reduced number of unionized workers the ability of unions to set labor standards has also declined.

There are a few major factor causing a decline in unionization. The erosion has been partially caused by harsh economic context for unions including shift to services, technological advance and trade pressures. However, another reason of progressing deunionization is due to unfavorable change in the application and administration of labor law at the national level and an hostile attitude of employers towards unions. Therefore, changes in law have caused weakening of unions and their ability to raise wages.

It is important to remember that the positive role unions is not limited to benefits only for unionized workers. Probably even more important is union’s impact on non-union employees.

Its impact goes far behind only premium wages: “in industries, occupations, and regions in which a strong core of workplaces are unionized, non union employers will frequently meet union standards or at least improve their compensation and labor practices beyond what they would have provided in the absence of a union pres­ence.” The general mechanism describing union's impact on nonunionized workers is that practises and norms established by unions became widespread throughout the economy. Nonunion employers were forced to conform to rules set by unions in order to remain competitive. In fact, until 1980s numerous sectors of economy followed the union’s policy and set in collective bargain agreements. Therefore, the erosion of unionization have strongly affected rising wage inequalities between nonunionized workers similar to those who were members of unions. According to studies “the direct impact of declining unionization accounted for 20.2 percent of the growth of overall male wage inequality”.

Considering all information there is clear how significant role unions play in raising real wage of workers situated in the middle of a wage distribution. It seems obvious that one the most efficient way of reducing inequalities in wealth distribution is by ensuring the strong position of unions by enforcing regulations in favor of unions.

Posted by Mike P. McKeever Institute of Economic Policy Analysis (MIEPA) at 8:59 AM