Japan's economy is in trouble. Most of the trouble arises from Japanese consumers spending too little.

Some economists are recommending that the country abandon a Keynesian policy of stimulus and low interest rates that has failed to remedy the situation and, instead, contract the economy with higher interest rates thereby precipitating a recession and, perhaps, a resulting worker productivity increase. See Martin Hutchinson copyrighted article linked below.

Although the economy historically has shown low levels of income inequality, Japan's current Gini Coeffcient is close to the USA. This level of Gini is a sign of consumer weakness with associated lack of Aggregate Demand. 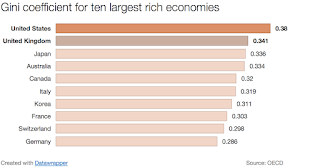 A better solution for Japan is to increase incomes for middle class families. Only then are they likely to spend more.

See my book on economic policies for the United States for an explanation at this link:


Here is the link to Mr. Hutchinson's article:

Posted by Mike P. McKeever Institute of Economic Policy Analysis (MIEPA) at 8:08 AM