INQUISITION 16: UPDATE FOR PRODUCTIVITY Failure of Labor Markets in the United States

The basic idea of free market economics is that prices can be lowered or raised to correct imbalances. When this idea is applied to labor markets it has unfortunate consequences.

While the United States has introduced several measures to protect workers’ incomes, new trends are reducing the effectiveness of those earlier measures.

When there is an oversupply of labor, then wages are reduced to the free market equilibrium. Since it can happen that the equilibrium wage is so low that workers cannot survive on equilibrium wages, the United States has imposed a minimum wage requirement on labor markets. That means the wages have a floor below which they cannot fall legally. 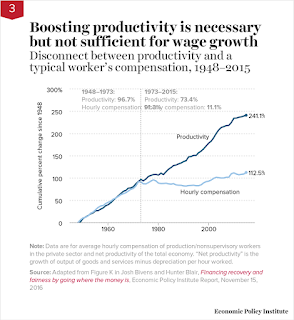 There has been violence associated with labor's drive to unionize and strike for higher wages. A union is a more or less voluntary association of workers who can negotiate for wages and working conditions as a monolithic group instead of a single individual. A single worker negotiating with an employer has no leverage since the employer can simply hire someone else for the job at a lower wage.

Laws in the United States require that employers negotiate with a legitimately recognized union instead of hiring new workers from the street.

But laws to weaken unions and continual underfunding of the National Labor Relations Board [the organization which enforces labor laws] have resulted in declining union membership and middle class incomes. 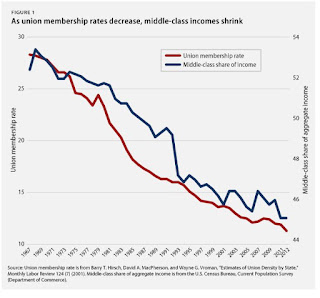 In addition to the above factors, there are at least two more trends in the labor market which drive wages lower.

More and more companies are merging and combining. Usually, the first order of business for a merger is to fire 'excess' or 'redundant' workers. That way the merger can generate more profits for shareholders, but at the expense of workers and overall consumption spending.

This graph shows employment in industries with low vs high concentration ratios. The conclusion is that less concentrated industries employ more people. 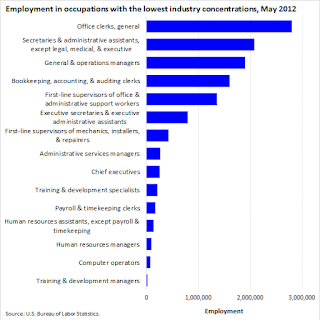 The fired workers then become an addition to the labor supply and tend to depress overall wages.

Some writers have called for a guaranteed wage for workers as robots take over many jobs. While it appears charitable on the surface, the fact is that unless workers have incomes they can’t buy anything. 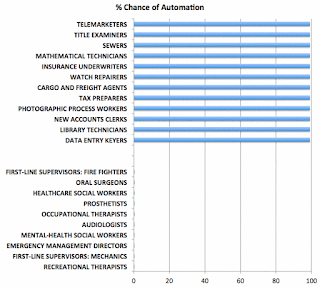 But, we have seen significant productivity increases AND stagnant wages for many years, thus providing profit increases for many companies. This means that the extra profits are accruing only to the shareholders with none going to the workers. 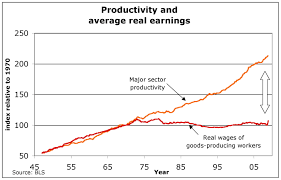 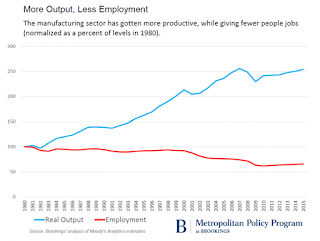 The implications of these trends are clear: Unless they are reversed, the United States will experience economic stagnation and recession resulting from a lack of consumer demand.

Although reversing these trends is unlikely due to the political environment, the solutuons are conceptually straightforward.

The policies required to reverse these trends are detailed in this book 'Occupy Wall Street Plan 12: A Proposal for Twelve Specific Governmental Actions to Correct Some Economic Imbalances in the United States of America Kindle Edition', which can be ordered at this link:

Posted by Mike P. McKeever Institute of Economic Policy Analysis (MIEPA) at 8:18 AM