Our system is showing that it is unable to solve the major problems we face - immanent climate change, severe wealth and income gaps, massive refuge flows, etc., etc.

Maybe ancient ways can offer a useful and different approach to life. 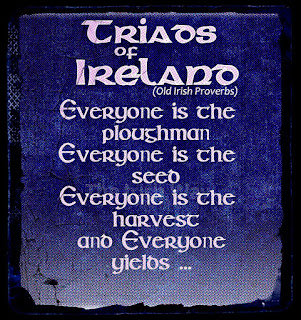 From - The Irish Way

If you're looking for something to read over the holidays? Consider one of the old Irish manuscripts.

Fír Flathemon, Collective Responsibility and Social Order in Early Medieval Ireland ... it might sound like a 'heavy' subject but it isn't.

There's loads of wisdom to be found in the old ways, that's why the wisdom was followed for centuries. People, especially those who were tasked with learning, keeping and interpreting the rules of Law, were often called on to handle disputes. They in turn referred to the manuscripts and would suggest choices to help resolve issues. These people relied on a natural justice, they accepted that certain actions would determine certain outcomes and understood the concept of 'implication'.

The Law of Natural Justice has since been replaced and we now try to operate under a system that criminalises actions instead of understanding the cause of those actions!

Obviously actions like 'Murder, Rape, Child Abuse' should be acted on with the necessary punishments, that is the 'Natural Law' but criminalising actions like a woman stealing sanitary products because she can't afford to feed her family AND care for herself, those actions require understanding of the wider issues.

Under the old system the 'leader' would be called into question as to why their communities were struggling and if they were found to be mis-managing then they were at risk of losing everything themselves, but these days the 'leaders' are the ones implementing the social structures under which these cruel conditions are dished out to us.

There's no denying we need change, people of the world are crying out for fairness and for the cruelty and injustice to end ... what do we replace it with?

When you take/make the time to read through the old manuscripts you'll find clues to ways in which people lived in harmony and peacefully and leaders were held accountable for the 'laws' they enforced.

I'm not proposing that we go back, I am proposing that we learn how to move forward as a just and caring society. Where equality and acceptance are mainstream and not an agenda, where fairness is understood and not a political ideology. Where people are free to explore the boundaries of their own learning and maturity is praised, creativity is promoted and consideration for each other is not seen as a weakness. This isn't some 'Eutopia' this is the natural leaning of humanity, all we need are the tools to get there.

Attached is a great blog post that explores more in depth the manuscript itself and considers it's meaning in today's world. Well worth putting the kettle on and settling in for the 20min read.

'... there is a sense of inevitability, of fate, involved. Meanness yields to liberality, conflict to peace, sorrow to joy. Not 'can yield' but 'will yield'. What is best will always rise to the surface and cast aside what is wrong, unjust or selfish. This is a warning worth heeding but it also gives a hint that there was underlying this advice a sense of a right order for things, that there is a natural balance to life which, however it might be temporarily suppressed, will inevitably come to the fore again....'


Posted by Mike P. McKeever Institute of Economic Policy Analysis (MIEPA) at 5:21 AM