BLOWOUT, Rachel Maddow, is a necessary book; it explains with facts, unassailable logic and humor the state of Russia today and why Putin continues to attack the West. 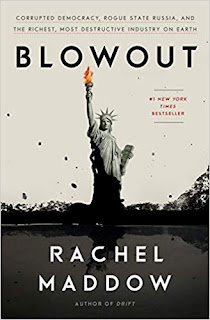 Rachel Maddow is host of the Emmy Award–winning Rachel Maddow Show on MSNBC, as well as the author of Drift: The Unmooring of American Military Power, a #1 New York Times bestseller. Maddow received a bachelor’s degree in public policy from Stanford University and earned her doctorate in political science at Oxford University. She lives in New York City and Massachusetts with her partner, artist Susan Mikula.

It seems that Vladimir decided about 20 years ago to bet Russia's future on oil as the only income generator for the country. Trouble is that Russia's oil companies and oil fields are running out of easily extractable oil. And, the oil companies in Russia are poorly managed and lack Western technology to install hydraulic fracturing.

Since Putin controls the oil companies like a mob boss, all the income flows to him and his associates. This leaves Russian people out of the income flow and very poor.

It's a classic scenario that usually leads to revolution - the people are hurting while the bosses control all the money with thug tactics including murder and rigged elections.

When Russia falls one hopes that a law based society and a diversified economy take the place of the current despotic state which depends on a single commodity.