As you know, workers in the United States of America have shown consistently increasing productivity for half a century or more.

Productivity is a simple concept, just divide the total output of the country, or the real GDP, by the total number of hours worked and you see a measure of how much wealth each hour of work produces.

Clearly, there are several factors which combine to increase productivity.

Increasing the amount of capital invested in the workplace will result in higher productivity as machines replace workers. And, developing new technologies which result in a single machine replacing even more workers also increases productivity.

Both of these factors can be attributed to business owners and the owners are entitled to a fair return for their investment in our market economy.

But, workers also have contributed to the productivity increase by improving their personal education levels. They have done so at their own expense and are therefore entitled to a portion of the increased wealth they produce in the form of higher wages.

However, increasing labor productivity has not correlated with higher wages, as seen in the chart below: 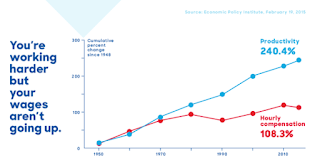 Posted by Mike P. McKeever Institute of Economic Policy Analysis (MIEPA) at 9:05 AM