The American system is broken. Most Americans want changes and better outcomes.

This first section provides evidence of Americans’ longing for real changes. It’s the same longing trump used in 2016. The evidence below is specific but the underlying malaise is broad based. Americans know we are living in a bad system. We will accept changes formerly thought impossible. 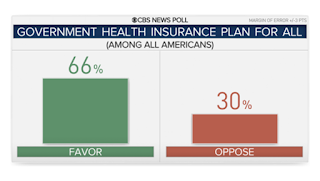 While such a plan is supported by almost all Democrats and two-thirds of independents, most Republicans don't think it is the government's responsibility to provide access to affordable health care, and most oppose this type of plan. [https://www.cbsnews.com/news/2020-polls-national-health-care-plan-favored-by-most-americans-cbs-news-poll-finds/]

Among Republicans, 47 percent wish for the EPA either to “remain the same” or be “strengthened or expanded,” while 35 percent want it “weakened or eliminated”.

The online poll of 9,935 people was conducted Dec. 16 to Jan. 12 and has a credibility interval, a measure of accuracy, of 1.1 percentage points. [https://www.reuters.com/article/us-usa-trump-environment/unlike-trump-americans-want-strong-environmental-regulator-reuters-ipsos-idUSKBN1511DU]
Voters Favor EPA Reduction in CO2 Emissions; Rassmussen: January 2020

“Big Corporations Have Too Much Power and Should Be Strongly Regulated” — 84% of Democrats, 72% of Independents and Nearly Half of Republicans Agree
Center for American Progress & GBAO: December 2019

‘Time and again, American voters voice their support for strong and effective regulations. Americans see the need for clear rules of the road that protect workers and families from reckless corporations that cut corners and put profits ahead of people.’
https://sensiblesafeguards.org/polling/

Over 60 Percent of Voters Think Facebook Has Too Much Power
Fox News: June 2019

Americans Generally Believe the Biggest Tech Companies Have Too Much Power and Ought to Be Split Up
The Verge: March 2020

These specific polls suggest the depth of our dissatisfaction. We will support drastic public action to stabilize the country as suggested in the following post:  A New Deal – Part 2

Posted by Mike P. McKeever Institute of Economic Policy Analysis (MIEPA) at 9:01 AM